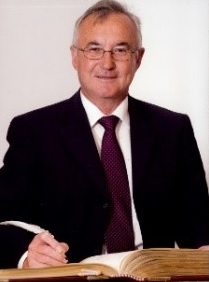 Professor David Roger Jones Owen, Roger for his friends, passed away in Swansea at the age of 77 on Monday January 13th after a long illness. He was Emeritus Professor in the Civil and Computational Engineering Centre at Swansea University, Wales, UK, and an international authority on finite element and discrete element techniques.

Prof. Owen was one of the few extraordinary individuals gathering all the attributes of being an eminent scientist and academic, and by having contributed with their work to the development of society. As a scientist he made important contributions to the field of computational mechanics. He was also a fine academic, an excellent teacher and a mentor of some 70 Ph.D. students. Last but not least, his work has been seminal to the development of computational mechanics worldwide.

His entrepreneurship side was evidenced by his personal involvement in creating and developing the company Rockfield Software Limited, twice acknowledged by the British Queen for being an innovative and successful international enterprise.

He received numerous recognitions and awards from international organizations. For instance, he was a Fellow of the Royal Society (UK), a member of the Royal Academy of Engineering (UK) and the US National Academy of Engineering. He also received the Gauss Newton Medal of the International Association for Computational Mechanics (IACM), the Grand Prize of the Japan Society for Computational Engineering and Science (JSCES) and the Award of the Spanish Association for Numerical Methods in Engineering (SEMNI). He received Honorary Doctorates from several universities (Porto, Cachan, Politècnica de Catalunya (UPC), Cape Town)

Prof. Owen has a long tradition for cooperating with many universities and research organizations worldwide. He was always very supportive of all the initiatives promoted by the European Community of Computational Methods in Applied Sciences (ECCOMAS) and helped to increase the links between ECCOMAS and the UK Association for Computational Mechanics.

At a personal level I have to acknowledge his long standing support to the Spanish community of computational mechanics and, in particular, to CIMNE, where he was the Chair of the International Scientific Committee, and the School of Civil Engineering of Barcelona at the UPC. Among his many initiatives linking Swansea and Barcelona, I highlight that he was the founder and co-chair of the 15 international conferences on Computational Plasticity held in Barcelona since 1987.

Roger was a person of an extraordinary humanity who knew how to combine a life dedicated to academic work with the enjoyment of the company of his many friends around the world.

We have lost a great scientist and a great human being. We will all miss him very much. My sincerest condolences to his wife, his daughters and the rest of his family.